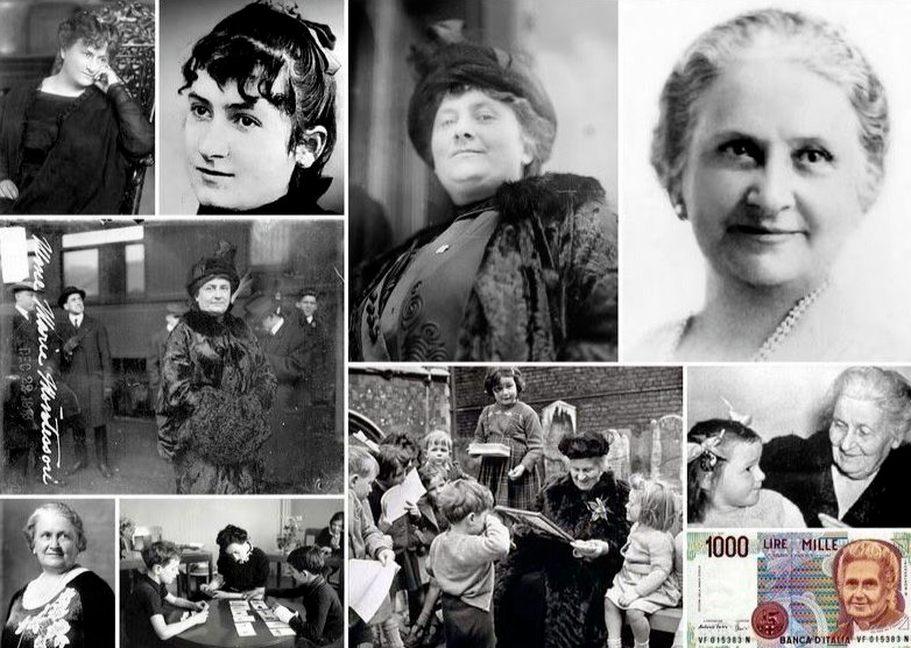 “One test of the correctness of educational procedure is the happiness of the child.”
Dr. Maria Montessori

Many people have heard about Montessori schools, or the Montessori method, but not many people realize that Dr. Maria Montessori was an actual person.

Maria Montessori was one of the most groundbreaking childhood educators of the 20th century. She gave birth to a pioneering method of childhood education that has survived, virtually unchanged in its essential features, for 123 years!

On Aug. 31, 1870, Maria Montessori was born into a well-educated middle-class family in Italy. In spite of the old-school values about women’s roles in society at the time, a determined Maria enrolled in a boy’s technical institute when she was 14. She studied her preferred subjects, math and science, and developed an intense interest in biology. Completely ignoring her father’s disapproval, Maria started medical school when she was only 18 and graduated as Italy’s first female doctor in 1896.

While working at the University of Rome’s psychiatric clinic, Dr. Montessori became fascinated with the treatment of children with special needs and worked on their behalf. She became the director of a school for children with learning disabilities in 1898, and after working with them for two years, these children, who were previously believed to be unable to learn, took and successfully passed a school examination along with “normal” students. Maria was regarded as a miracle worker by other educators, and her success led her to study anthropology and psychology to unravel the potential of “normal” children. Maria Montessori believed that if her method would work for children with disabilities, then it could be used to benefit other children in a powerful way.

In 1907, Maria founded a school called Casa dei Bambini (Children’s House) in the slums of Rome. It was an enormous success and the children thrived. Her unparalleled accomplishment with these children was publicized around the world. Dr. Montessori was invited to visit the United States by Alexander Graham Bell, Thomas Edison and others. She spoke at Carnegie Hall in New York City and then attended the Panama Pacific Exposition in San Francisco in 1915. For four of those months, behind glass walls, 30 children attended a Montessori classroom. Montessori education was catching on in the United States, and visitors would sit on benches to watch the teaching methods in this classroom. Maria Montessori was so confident in her approach that she only allowed students without any prior school experience to be a part of the classroom. The glass classroom was a success, gaining the attention it desired and spreading the word of the power of Montessori education. Maria was awarded two gold medals for exceptional education. Within 10 years, there would be over 1,000 Montessori schools in the United States.

Maria continued her educational research, but the political situation in Europe forced her to leave for India. Fascist governments could not dampen her emphasis on peaceful human collaboration, and consequently her schools were banned in Italy, Spain and Germany. In India, she introduced her teaching methods and trained teachers to carry on her legacy. Maria also worked on her elementary curriculum, which she called a cosmic education, and she wrote and published her book, "Education and Peace." Not long after, Maria Montessori was nominated for the Nobel Peace Prize three times — in 1949, 1950 and 1951.

Dr. Maria Montessori spent her final years in the Netherlands. She passed away in 1952 after a lifetime devoted to the study of child development.

The Montessori method has shown an amazing degree of resiliency and most believe that it is a powerful tool for education and real learning. Maria Montessori’s goal was to promote global understanding and international peace. With it, we can all learn more about ourselves and give our children, who are our greatest treasures, love and respect when it comes to learning.